The tide gauge equipment is located in the Caledonian MacBrayne ferry terminal on Mishnish Pier, Tobermory, and the pressure points are located on one the pier legs as shown.
Click here to see a map of the site in a separate window.

The tide gauge equipment is housed in an instrument cabinet, and the pneumatic bubbler system consists of two full-tide and mid-tide pressure points, mounted on steelwork attached to one of the pier legs. All three pressure lines are monitored by the POL data logger. 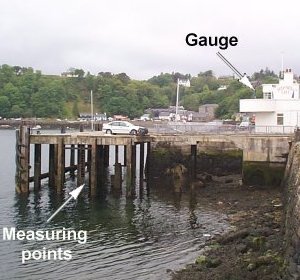 There are currently no external users.

Pre 1979 – Lea gauge operational
1979 – The Lea gauge was replaced with an Ott punched tape recorder
1983 – Divers reported that the pier was no longer safe to use. All equipment was removed from site
1987 – New jetty was constructed. The DATARING system was installed with two full-tide bubblers and a datum probe
1992 – DATARING system removed during ferry terminal refurbishment
1993 – DATARING system refitted. New steelwork with two full-tide and mid-tide measuring systems installed
2004 – New data logger installed