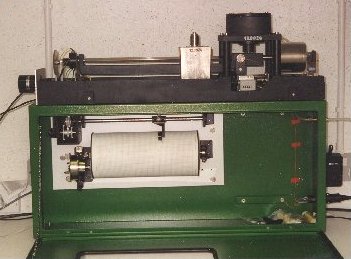 This gauge derives its measuring signal from the pressure produced in a bubbler system. The pressure is applied to one end of a pivoted beam. On the other side of the pivot is a weight which is moved up and down the beam by an electric motor in order to counter balance the pressure signal.

At the far end of the beam are electrical contacts which operate the motor in the correct sense when the beam moves out of balance. The motor is also geared to a double helix shaft with the pen arm attached. The position of the pen is therefore proportional to the applied air pressure.